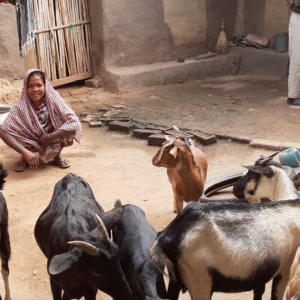 Radha Devi is a progressive Goat rearer from the Gulalpur village of Sadar Munger in Bihar. She has been working as a Pashu Sakhi (goat health worker), a concept implemented by SEWA Munger with primary support of ITC Sunehrakal Mission since 2019. After being trained as a Pashu Palak, she promoted various medical interventions needed for goats such as timely vaccinations, castration services, distribution of deworming tablets across her village. Such efforts resulted in improved health outcomes among the goats of the village households, thus drastically decreasing their mortality, which had been a protracted issue in the village.
Before the intervention of SEWA, a major challenge she had been facing was the high mortality of goats due to lack of awareness. She was not able to get primary treatment for the goats but now she is an empowered Pashu Sakhi who not only works for herself but also for the community. She provides many services to the goat rearer through Goat Resource Centre and Goat projects such as Dana Mishran, Pashu Chat, Masala Bolus and primary treatment in her village. Better health of goats led to the higher sale of the livestock and that resulted in her income gradually increasing. While earlier she would earn Rs.2000- Rs.3000 from selling one goat, she now earns around Rs.10,000 for one goat. She says, “Now people know me as doctor didi in the village. With the increased income, I am able to send my children to a better school for education.”