Despite being significant contributors to India’s economic growth, women in the informal sector remain outside of traditional forms of financial institutions and services. They mostly rely on informal forms of finance, such as loan sharks, family members, and neighbours. Loan sharks and informal financial services often put families at risk of exorbitantly high interest rates and loss of essential assets, such as land, housing, and savings. Women who are unable to pay back their loans spiral into a cycle of debt, further perpetuating poverty traps and contributing to the economic and social stagnation of families and communities. In the majority of the cases, credit remains difficult to avail or the transaction costs for borrowing and using saving facilities remain high. In such situations, access to services, such as savings accounts and loans, are critical to protecting, managing, and growing assets. It, thus, becomes imperative to empower these women as independent financial actors by giving them resources to save, invest, and protect their earnings.

SEWA’s Financial Inclusion programs work towards enabling marginalised women who have been left behind to become financially independent and empowered. These programs address the different needs of these women throughout their lifecycle, for instance, for starting or expanding their business, educating their children, repairing their house, repaying old debt, for healthcare, unexpected calamities and old age. SEWA overcomes access and information barriers that women face with respect to finance through two approaches: 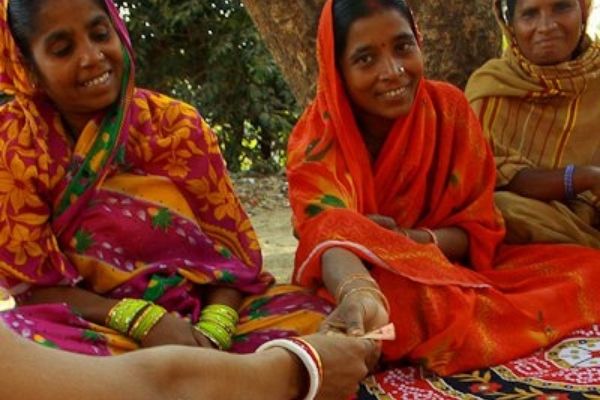 The cooperatives of SEWA introduce them to a variety of financial products and services. Poor, but enterprising, these women always find a way of contributing to the development of their families and communities. The leadership, management, and direction are all managed by women shareholders and account owners of the cooperatives, allowing them to invest and grow their assets within the institution. It provides them with a platform to unlock large amounts of credit, necessary financial knowledge and guidance to spearhead their aim of attaining financial independence.

They also receive doorstep banking services from our Bank Sathis – intermediaries who go door-to-door to collect savings, conduct verification checks for loan applications, and collect dues on active loans. To enable them with working capital and prevent them from being exploited by private moneylenders, the interest charged on these loans is just 1.5% per month instead of the whopping 5-10% charges of private moneylenders.

SEWA Samvaad 2020: Bridging the Digital Divide for Women in the Informal Economy

Bridging the gendered digital divide in the informal economy

SEWA has long recognised the positive role that technology can play to empower women in the informal economy.