Since 2004, SEWA in West Bengal has been transforming the lives of informal women workers engaged as handloom weavers, beedi rollers, and domestic workers. The journey of SEWA Bengal started with an inquiry into the state of beedi workers in Murshidabad, the highest number in the State. Those findings were shared with the Block Development Officer, with whose support, our work began in the two backward areas of Shamsherganj and Sammatinagar in Raghunathganj block in Murshidabad.

SEWA Bengal started to organize women and address their trade-related issues with an aim to promote sustainable livelihoods. This was carried out through advocating for regulation in the informal sector; facilitating social security protection, including access to government healthcare schemes; and promoting the women’s decision-making abilities. Our work expanded to the Lalgola block in Murshidabad and to Manikchak block in Malda in 2014, and in the next two years, we began our work with weavers and ancillary workers in Fulia.

Over the years, SEWA Bengal has been successful in growing its membership of informal women workers to 30,000 in the state and creating a cohort of community leaders for ensuring sustainable impact. In West Bengal, SEWA Bengal employs a wide range of interventions to address the complex net of vulnerabilities faced by women in the informal economy by using the strength of collective action that is aimed at self-reliance.

In 2016, SEWA Bengal began its work with weavers and ancillary workers in Fulia

Currently, SEWA’s membership in the state stands at around 30,000 women from the informal economy 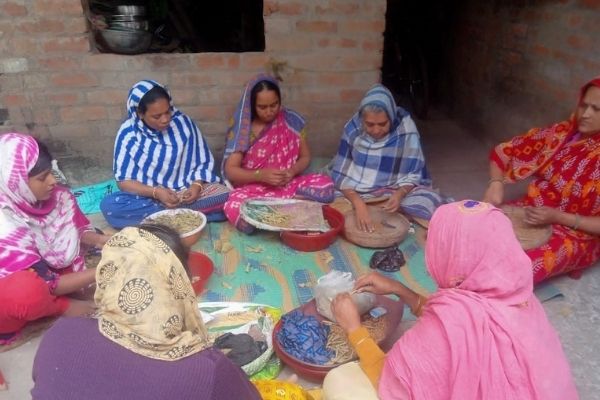 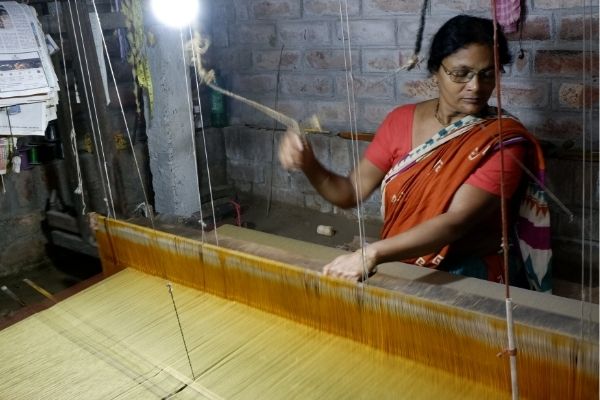 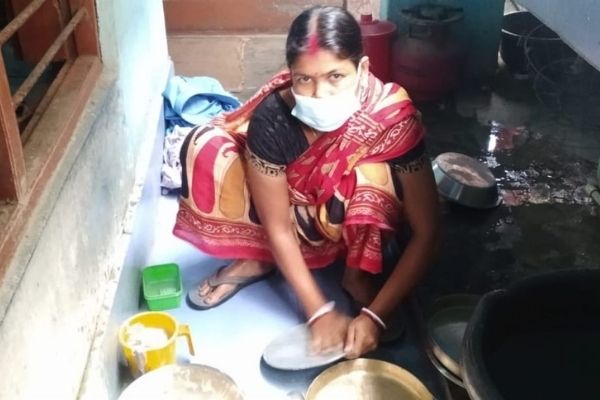 Achieve full employment and better access to resources and markets

Building resilience among women-owned collective social enterprises and women microentrepreneurs in response to COVID-19 in Nadia and Murshidabad. 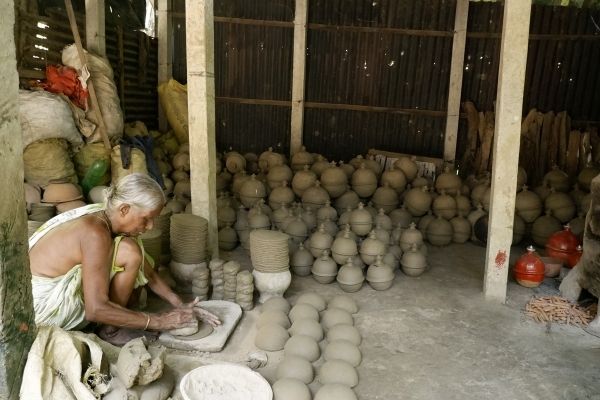 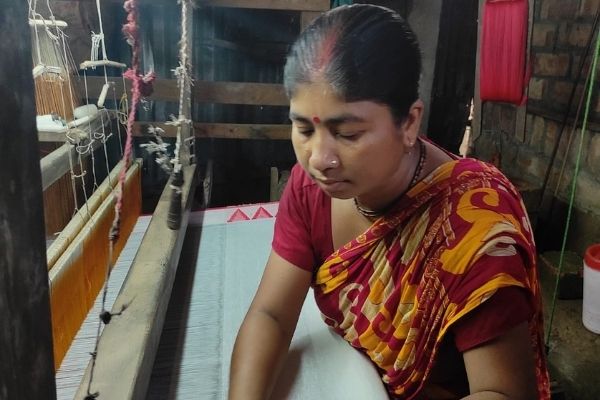 Capacity building of grassroots leaders and young girls and reviving livelihoods of the weavers’ community during the pandemic. 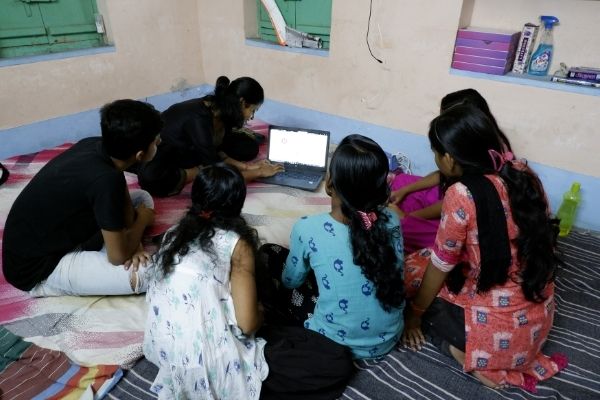 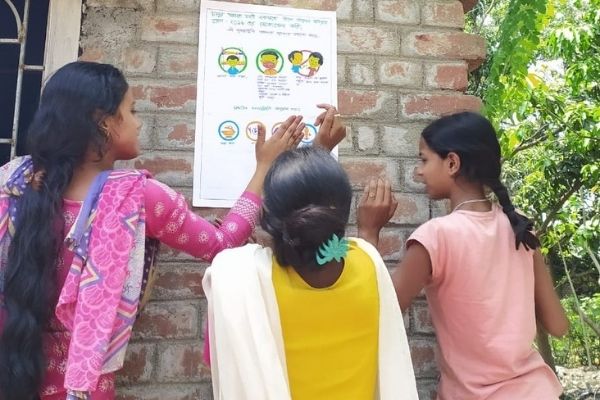 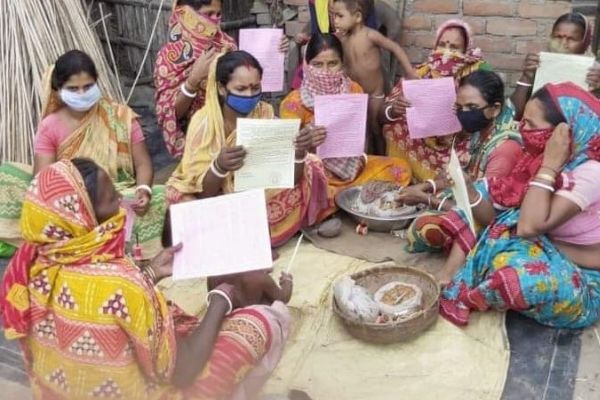 Over the years, SEWA in West Bengal has been organizing beedi workers, domestic workers, and weavers to strengthen their collective bargaining power by advocating with Mahajans (contractors and middlemen) and trade groups.

SEWA Bengal has also formed trade committees for beedi rollers and weavers to ensure a dialogue to identify and address trade-specific issues. In Behrampore, SEWA Bengal initiated the “ My Fair Home Campaign'' to promote fair wages and bring behavioral change among employers of domestic workers to ensure decent work. 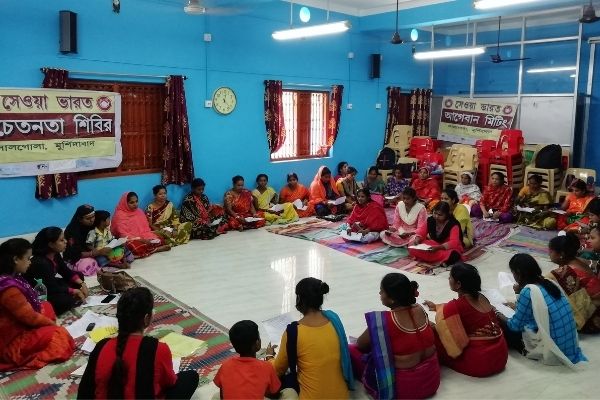 SEWA Bengal has been working closely with stakeholders at the state level and local level to ensure the fulfillment of rights and entitlements of beedi rollers, domestic workers, and weavers in the informal sector.

The pandemic resulted in market disruptions, leading to a drop in the demand for beedis that affected the livelihood of the beedi rollers. Their wages were halted, even after the restrictions were lifted, they were not receiving fair wages from the Mahajans. In response to this, 40 SEWA agewans in Raghunathganj mobilized community members against rolling beedis at reduced wages. Following this, a dialogue was initiated with the Mahajans where the demand of receiving fair wages was put forward.
Similarly in Lalgola, agewans organized women and confronted the Mahajans with a demand for wages that was fixed before the pandemic had hit. The Mahajans agreed to the demand of the women and the issue was resolved immediately. To protect the livelihood of the marginalized communities in the areas, SEWA Bengal facilitated linkage with MGNREGA; a total of 150 members received work through this. 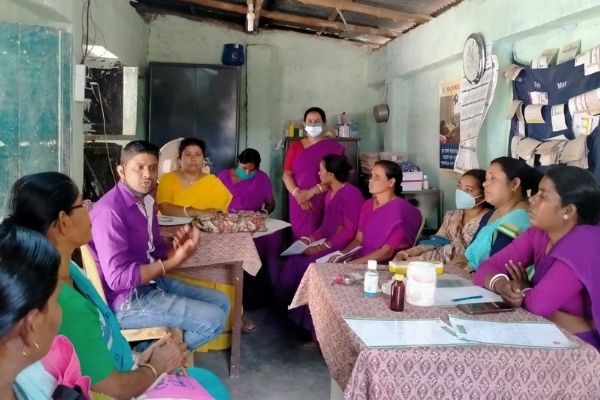 Women in West Bengal have been facing systematic barriers in accessing social welfare schemes, economic opportunities, and healthcare facilities due to limited knowledge and mobility barriers.

Over the years, SEWA Bharat has been successful in organizing community members and facilitating their access to government schemes and services thereby ensuring their economic and social security.
We are currently running 7 SSKs across Murshidabad, Malda, and Nadia which provide service to SEWA members by means of sharing key information, linkages to government schemes, and a safe space to mobilize for community change.
Due to the pandemic, home-based workers in West Bengal faced a wide range of challenges with no income, no healthcare coverage, and limited government support programs. In this situation, agewans collected the names from their own areas for the distribution of ration kits. SEWA Bangla distributed ration kits along with soaps to the families of 400 weavers, 400 domestic workers, and 1260 beedi workers in the Nadia, Malda, and Murshidabad districts of West Bengal. 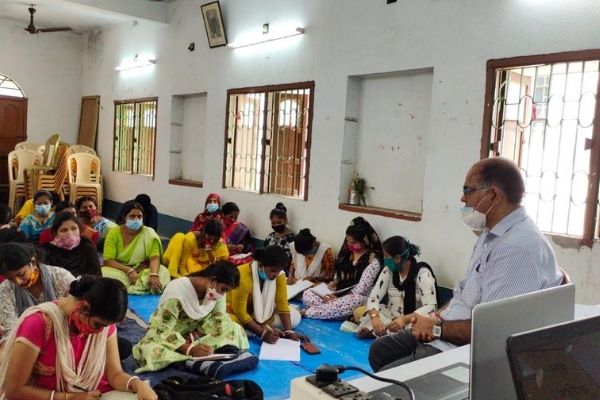 In West Bengal, SEWA conducted Digital Literacy sessions to train its members on various aspects of savings and conducting online transactions safely and securely for their business purpose.

SEWA organizers provide training to the agewans on social security schemes, rights, and entitlements. SEWA Bharat in West Bengal has been running SEWA Youth Resource Centres in Murshidabad focusing on providing alternative livelihood training (mainly tailoring) to get young girls out of beedi rolling. In both SYRCs, one special class has been added for advanced training. In the 2020-21 financial year, 118 girls received tailoring training. A total of 8 girls have moved completely out of beedi rolling and into garment making. SEWA Bharat in West Bengal has trained 17 adolescent girls on using digital technology like Kobotoolbox for data collection.