What is an Unauthorised Colony ?

A prevalent type of informal settlement usually on land not zoned for residential purposes, or in disregard to master plan regulations. There are approximately 12.5 lakh UAC households, housing over 40 lakh Delhi residents, that is over 30% of Delhi’s population. They remain in a state of precarity, maneuvering limited ownership rights, contested non-residential land use, and a lack of formal housing finance
In UACs, service deficiencies are prevalent. Lack of piped water connections, sewerage systems, and inadequate drainage are common across the 1700 odd colonies that exist in Delhi.

Government of Delhi invited applications from the RWA’s of UACs to submit the colonies’ layout and apply for regularisation.

Ahead of assembly polls in 2008, ‘Provisional Regularisation Certificates (PRC)’ were granted to 1,218 UACs and 895 were regularised in 2008.The Delhi Lokayukta later ruled that these were done to gain political mileage. PRCs seem to have had little to no effect on full regularisation or service provisioning.

Missing Link:  Regularisation refers to both layout approvals under Master Plan and conferring ownership rights under PM-UDAY. As of now, there is no integration of these two policies.

Integration of the master plan and PM-UDAY are key to regularisation of UACs. Currently, these two schemes are functioning in silos. Complete regularisation entails layout approvals via the Delhi Master plan, along with the transfer of ownership rights through PM-UDAY.

Delhi Master Plan 2041: A half-step forward for unauthorised colonies – but more is needed

Enumerating the Semi-Visible : The Politics of Regularising Delhi’s Unauthorised Colonies

Disclaimer : The content of this webpage is based solely on research and on-ground implementation work during the ZAA (Zamini Adhikaari Abiyaan) project under the WOW (Work and Opportunities for Women) vertical, funded by the FCDO (Foreign, Commonwealth and Development Office) and implemented jointly with the Mahila Housing Trust (MHT). At present, the roadmap aims to visually depict the de-facto and de-jure strategies that aid in accessing tenure security for three types of informal settlements in Delhi – Unauthorised colonies, resettlement colonies, and slums. It is an attempt to collate the opportunities and barriers encountered by SEWA to access tenure security in the informal settlements of Delhi and is intended to be used by researchers, academicians, students, and civil society organisations (CSOs).

De jure strategies are legal or direct routes for strengthening land tenure security. These include building linkages to government schemes (such as PM-UDAY, MMAY) and provisions in master plans.

The Master Plan is a vision document that dictates the city’s overarching vision for development, highlighting spatial  provisions and norms that guide the development and imagitation of the city’s fabric.

As per the policy, PM-UDAY scheme is restricted to the area constructed and in possession prior to 1st January 2015. The scheme is applicable only for units built up to the third floor (G+3) and only permits residential use.

Those who are part of the government identified list of 1731 colonies are eligible to apply for the scheme, thus ensuring a greater access to tenure security by being on the list.

The type of land (private/ government/ forest/ river bed) that UACs are present on, determines the negotiation capacity with the state. For eg. UACs that are on forest land or in areas nearing the river bed face higher number of hindrances.

Property tax documents are not mandatory, but serve as additional proof showcasing occupation, and duration of stay.

General Power of Attorney (GPA) is not considered as a legal document of ownership for immovable properties. However, the PM-UDAY scheme recognizes GPA as an official ownership document through which residents can apply for the scheme.

Sixty years and three plans later, the MPD 2041 is the first to map UACs and spatially recognize their presence in the city. By visibilisation, we refer to the plan acknowledging the presence of these colonies in the city, paving a pathway for formalisation.

In the detailing of two improvement schemes for UACs, the plan offers a homogenous response to the heterogeneity of UACs.

Although to varying degrees, both schemes ignores the prevalent built realities (high density and compact form) of these spaces.
Scheme one requires huge technical and financial costs for residents, and is unclear on clauses to ensure people’s participation in the process of regeneration. Scheme two fails to recognise that the existing built morphology cannot conform to standard building bye-laws

Transformation of UCs through the regeneration scheme, as envisioned by
DDA Source: Webinar presentation by DDA on 16.07.2021

Planned colonies are typically recognised under residential land use (marked in yellow in the MPD 2041). Despite mapping UACs, the MPD 2041 overlays these colonies over various land use categories. Land use determines the applicability of UACs for improvement schemes listed in the Master Plan. The current classification prevents over 75% of the area (see above) occupied by UACs from applying for improvement schemes. The break-up is provided below. 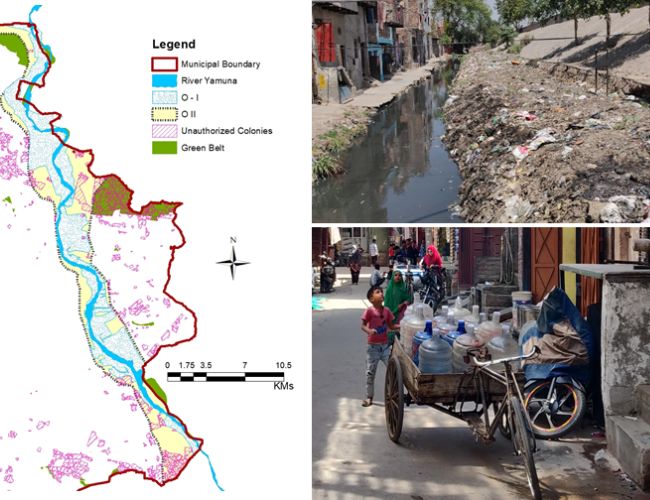 50% of the area under UACs is demarcated for

potential land pooling; Close to 25% of the area lies under eco-sensitive areas including Zone – O, a green development area, and a regional park. Other colonies are placed under recreational and commercial land-use areas. (See Figure 1)
Land use is better understood as a spectrum, with certain categories being more precarious than others. One such category is Zone O. Regarded as flood-prone, the zone limits construction and regularisation activities, despite the MPD 2041 bifurcating the zone into two categories: Zone O-I (river zone, active floodplain) and O-II (Riverfront Regulated Area) housing most built-up areas including UACs.
Figure 2: Draft MPD 2041 (on the left) depicts the proposed O-I zone (Yamuna and its floodplain) and the overlap of UACs over O-II and the green belt; Rajeev Nagar (on the right) – a UAC on the proposed O-II area is deprived of basic infrastructure services: Community exposed to a large open drainage / dump yard (top right) and residents forced to purchase bottled water due to limited piped water supply (bottom right). 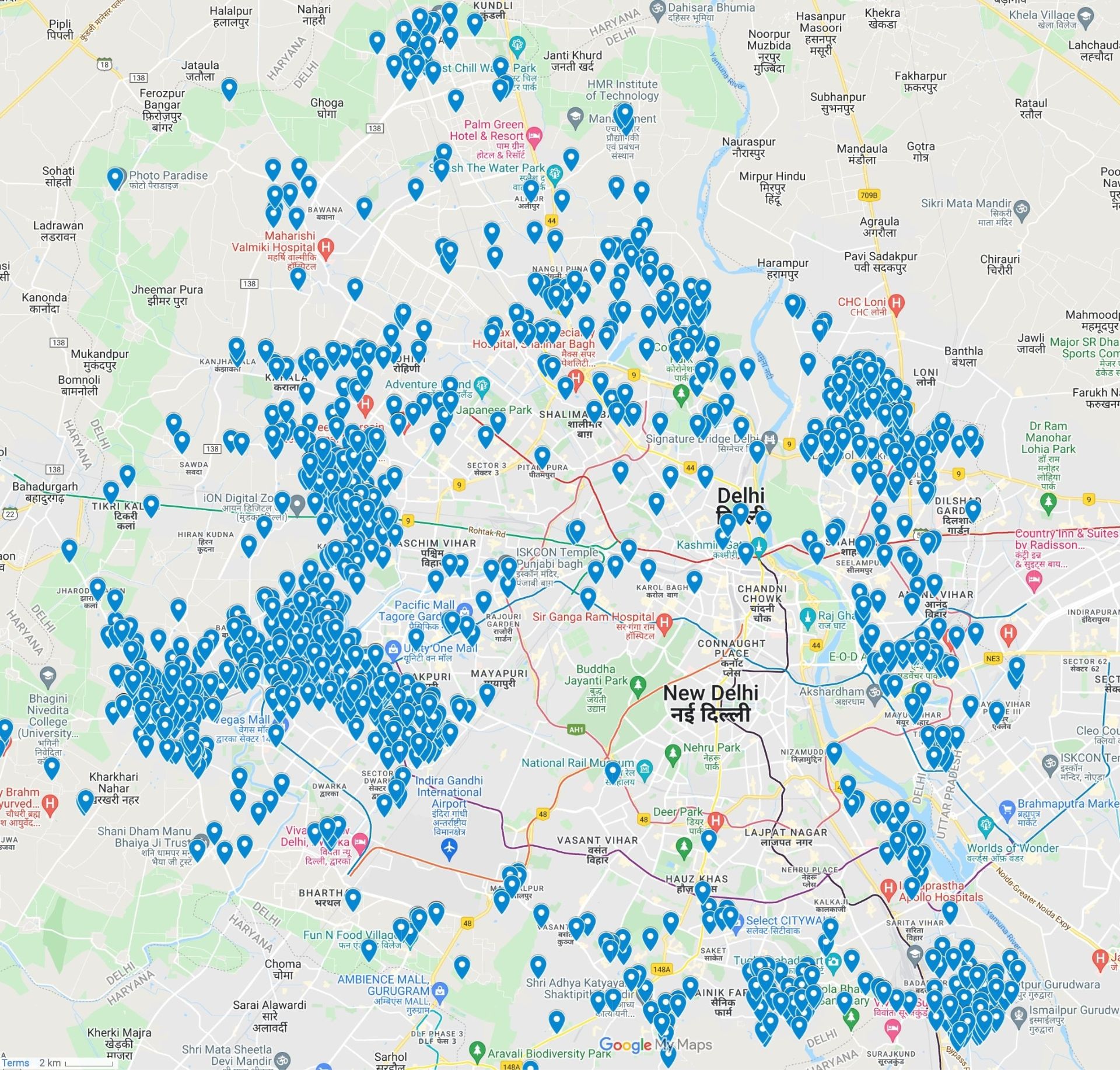