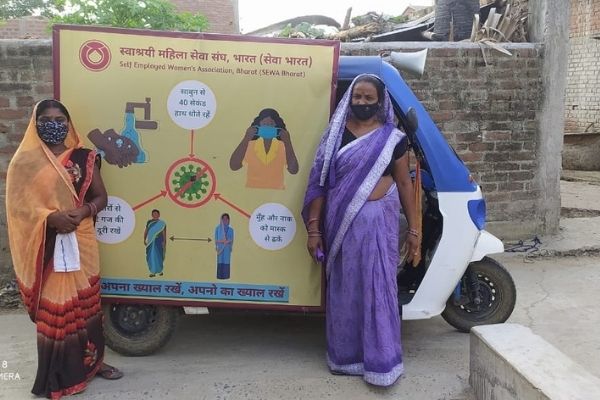 > What We Do > Organizing and Collectivising

In October 2018, SEWA Delhi organized a ‘My Fair Home Campaign’, in New Ashok Nagar, Delhi which is home to approximately 3000 women domestic workers. The campaign sought to organize domestic workers and make them aware of the tenets of the International Labor Organization’s Convention 189. It reached out to 150 of them, one of whom was Sapna ben. When Sapna ben first heard of the convention, she was taken aback. “When I realized that minimum wage as a basic right of domestic workers is being talked about on an international platform it gave me enthusiasm to fight for my rights even more ”, says Sapna ben. She started attending SEWA’s mohalla and trade meetings regularly. She gradually went on to lead 45 women to form a collective to amplify their demands for the right to decent work. As a collective they were able to stand up to their employers by refusing to go to work and convince them to raise their wages from Rs 1,200 to 1,500 per month. This was a significant move ahead in the movement and the biggest take away being that the members realized the power of collective bargaining. Sapna ben says that she will motivate more women to come together, so the employers understand how important domestic workers are.