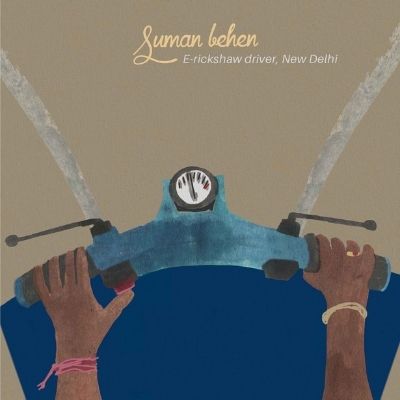 > What We Do > Microentrepreneurship

Suman behen is a 36-year-old mother of four, wife, and micro-entrepreneur in Jahangir Puri. About 6 months ago, she purchased an e-rickshaw and began a driving service. Being her own employer allows her to earn a living and prioritize her family.

“My only dream is to make my four daughters stand on their own feet. No matter how hard I have to work, I don’t want to be dependent on my husband,” Suman behen says. She is undoubtedly raising her daughters to become trailblazing women by example.

Auto-driving is a male-dominated profession. So, becoming an e-rickshaw driver is not only a personal feat but also a powerful challenge to the social norms. Initially, her family responded with a chorus of: “How can you drive an e-rickshaw being a woman? Do you know the kind of people who roam outside?” Nevertheless, she persisted: “I was prepared to face whatever was bound to happen. I had to think about my kids and their future.” She also began her e-rickshaw business 15 days before the COVID-19 lockdown in March. To feed her family, she made the bold decision to violate regulations and drive early in the morning.

SEWA Delhi has mobilized 6-8 women to become e-rickshaw drivers by teaching them motor skills, helping them apply for a driver’s license, and financing flexible loans for the purchase of e-rickshaws. However, Suman behen does not see the e-rickshaw as the limit. Once her loan is paid, she aspires to expand her business by learning to drive bigger cars.

Reflecting on the freedom her business has given her, Suman behen says: “Most people think women should remain inside the house. […They think] we’re helpless. [But] now, when I step out of the house to do something, I don’t need anybody’s help. […] I can do it on my own.”

Suman behen is a #MahilaMicropreneur.